Bognor Regis 6 a side

Report a problem with this listing

FOLLOW IN THE FOOTSTEPS OF LEGENDS WITH CHAMPIONS LEAGUE CHANCE Cristiano Ronaldo, Gareth Bale, Lionel Messi – and you!
The opportunity to follow in the footsteps of those legends is on offer to all 6 a side footballers in Bognor Regis as they are given a golden chance to compete in the Champions League for small sided football teams.
Leisure Leagues – who run a league at Arun Leisure Centre- has teamed up with the International Socca Federation (ISF) to exclusively offer footballers the chance to compete in the Champions League for 6 a side 7 a side teams to be held in October.
Leisure Leagues Head Of TV James Coe said the competition represented the chance of a lifetime for footballers: “It will be an incredible event. It would be great to think that a team of ordinary local footballers could go out there and compete with the best in Europe.”
James explained that this was just one of the benefits of Leisure Leagues’ tie in with the ISF. “Through our work with them we are able to give our players these opportunities. That’s why it is so important that we were involved”, he said. “We are delighted to offer the Champions League to our customers.”
The tournament takes place in the town of Porec, Croatia and kicks off on 18th October and there is a prize of £3000 to the winners.
For more info click here: http://soccafederation.com/competition/champions-league/
For more info about the league: https://www.leisureleagues.net/league/arun-leisure-centre/bognor-regis-monday 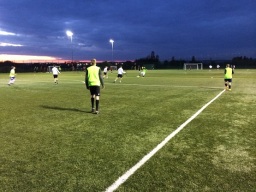 Start your business with Tide

Get off to the best start with £75 in your new account on us!

Wave goodbye to monthly fees, sign up in minutes and get £75 on us!

Is this your business?!

Claim now!
Show me directions to Bognor Regis 6 a side